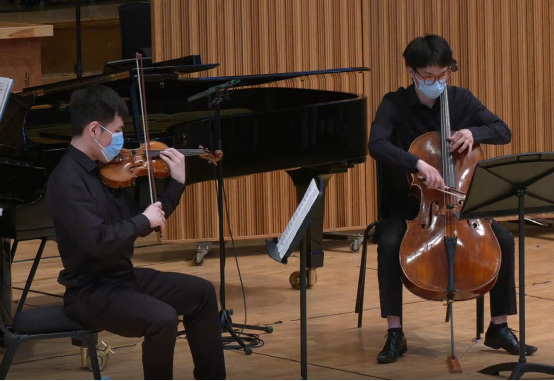 Trio Perform movements from Shostakovich Piano Trio No.2 in E minor on Livestream

The Trio: Lu Chen, Tzeshui Ip and Yingying Yu performed "The 3rd and 4th movements from Shostakovich Piano Trio No.2 in e minor" in a livestream on Ro

The Trio: Lu Chen, Tzeshui Ip and Yingying Yu performed “The 3rd and 4th movements from Shostakovich Piano Trio No.2 in e minor” in a livestream on Royal College of Music Channel back in May of 2021. The trio did justice to this wonderful piece of classical music. Let me start by explaining a little bit about the writer of this piece of music in the next paragragh.

About Shostakovich
After completing his Eighth Symphony during the height of the Second World War, Shostakovich turned his thoughts towards a Piano Trio. He had already composed one such work early in his career, but it remained unpublished in his lifetime. This new composition, however, which occupied him from December 1943 to August of the following year, turned out to be rather different from his first effort and was conceived on a grander scale.
It’s a work that reflects not only the tragic circumstances of the period in which it was written, but also mourns the loss of the brilliant musicologist Ivan Sollertinsky who died unexpectedly in February 1944 at age of 41. Shostakovich was utterly devastated at the passing of his closest friend and poured out his anguish in a letter to Sollertinsky’s widow: ‘I have no words with which to express the pain that racked my entire being when I received this news… I am totally indebted to him for all my education. It will be unbelievably hard to live without him.’

The music of Shostakovich’s Piano Trio No. 2
The Second Piano Trio opens with undoubtedly one of the most strikingly original musical gestures in the entire chamber music repertoire, with the eerie stratospheric sounds of an unaccompanied cello playing a slow grieving melody in harmonics. This lament is subsequently imitated in lower registers by the muted violin and bleak octaves in the piano. It’s a passage eloquently described by the violinist “Rostislav Dubinsky” as ‘an anxious premonition of misfortune’. A gradual speeding up of tempo merely intensifies the underlying sense of unease with music that moves disconcertingly between moments of anger and defiance and those of desolation and bleakness.

Lu Chen, Tzeshui Ip, and Yingying Yu Perfomance
Although the perfomance was not done infront of a live audience perhaps due to the Covid crisis in 2020, it was streamed live on the Youtube channel of The Royal College of Music. The comments were pouring in during the live performance in the comment section. This gesture showed the appreciation that audience felt while listening to the trio performing. Today, the video has over 7000 views and its steadily increasing everyday.  Lu Chen played the violin while Tzeshui Ip handled the Cello, and on the piano was the fiesty Yingying Yu.
Feel free to listen to their perfomance which starts at the 2:10:13 mark and ends at 2:26:43 mark.
Enjoy