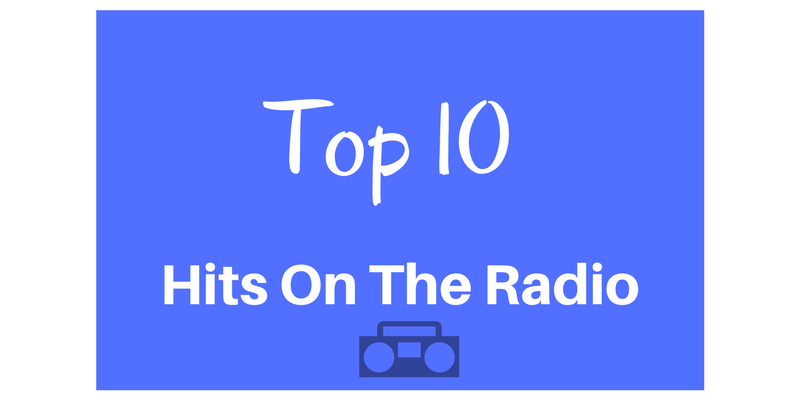 As an artist, the number airplay your song gets greatly determines the success of your song. Radio play exposes artist's music to a wide audience and

As an artist, the number airplay your song gets greatly determines the success of your song. Radio play exposes artist’s music to a wide audience and most likely get them new fans. We will bring together top 10 songs that are getting radio plays all across the world.

Radio isn’t just the only way artist get to connect with new fans, other means have been created and made super effective thanks to technology, so the list of songs below won’t be surprisingly new to you.

In the United Kingdom, “Something Just Like This” debuted at number thirty on February 24, 2017, reaching it’s number two peak position the following week. It spent nine consecutive weeks in the top 10.

“Stay” peaked at number seven on Billboard Hot 100, and number one on the Mainstream Top 40, making both Zedd and Cara’s third top ten songs on the chart.  The song is super infectious and immediately likeable. You can learn all the romantic words by studying the beautiful lyric video above.

“Body Like a Back Road” also reached number one on the Country Airplay chart and stayed at that spot for three consecutive weeks. On the week after Hunt’s performance at the ACM Awards, the song sold 70,000 copies and jumped up six places from number 12 to number six on the US Billboard Hot 100, becoming Hunt’s highest-charting single, and his first top 10 single overall, on that chart.

With this peak, the song became the highest-charting country music song on the US Billboard Hot 100 since “Cruise” by Florida Georgia Line, which peaked at number four in 2013. The song also crossed over to pop radio.

The song was certified Silver in the first week due to selling 200,000 units and Gold in the second week selling 400,000 units. The song remained at number one in its second week, selling 139,000.

It has stayed at number one for 13 consecutive weeks on the UK Singles Chart, and a further week at the top after a week’s interruption by Harry Styles’ “Sign of the Times”. As of July 2017, the song has a combined sales of 2.6 million units across all platform in the UK, with 717,000 copies in downloads and 184 million streams, which made it the most-streamed song in the UK of all time.

As the song reached the top spot of Pop Songs, Mars tied with Justin Timberlake for the most number-one songs on the latter chart among male soloists. It has spent nine weeks on the top of the Billboard Radio Songs, a new record for Mars, as a solo artist. It has surpassed its previous seventh-week number one runs for “Just The Way You Are” (2010) and “Locked Out of Heaven” (2013).

It has spent 20 weeks on the top of Hot R&B Songs, tying the record for the most week spent at number one with “Starboy” and “One Dance.

Despacito is a reggaeton-pop song composed in common time with lyrics about having a sexual relationship, performed in a smooth and romantic way. Commercially, the song topped the charts in 45 countries and reached the top 10 of 9 others, making it both Fonsi and Daddy Yankee’s most successful single to date.

It became the first song primarily in Spanish to top the Billboard Hot 100 since “Macarena” (Bayside Boys Mix) in 1996. The official video for “Despacito” on YouTube received its one billionth view on April 20, 2017, after 97 days, becoming the second-fastest video on the site to reach the milestone behind Adele’s “Hello”. It received its two billionth view on June 16 and its three billionth view on August 4 after 154 and 204 days respectively, making it the fastest video on the site to reach either milestone. With its 3.3 million certified sales plus track-equivalent streams, “Despacito” is one of the best-selling Latin singles in the United States.

“Believer” broke the 14-year-old record for the most spins on the Mediabase Alternative chart. “Believer” has reached the top ten in Austria, Canada, Czech Republic, France, Hungary, Italy, Poland, Portugal, Slovakia, Switzerland, and the United States.

The original idea of “Attention” began to develop in 2016 when Charlie started to record bits of the song while he was on tour in Japan. Puth premiered the song in an “immersive music exhibit” in Los Angeles called “The Attention Room” on April 19. The pop-up installation features an LED “infinity tunnel” and is designed to replicate the brain’s reaction to receiving attention. Two days later, “Attention” was officially released as the lead single of Puth’s second studio album.

2. There’s Nothing Holdin’ Me Back

In the United States, the song has peaked at number six. It has also reached higher positions on the charts of other countries, such as Australia and the UK, reaching number four in both, and in Mendes’ home country of Canada, where it has achieved number six.

On June 26, “Wild Thoughts” debuted at number four on the US Billboard Hot 100, with 89,000 digital copies sold and 36.3 million streams. The song marked Rihanna’s thirty-first top ten, Khaled’s third and Tiller’s first. The song’s debut additionally marked the third-highest debut of Rihanna’s sixty Hot 100 entries and made Rihanna the fourth woman to make at least 60 Hot 100 appearances, joining Nicki Minaj (78), Aretha Franklin (73) and Taylor Swift (70).
In its second week, the song rose to a new peak of three on the Billboard Hot 100, becoming the first song to debut in the top five and rise in its second week since Eminem’s “The Monster”, also featuring Rihanna (2013). After slipping to number four on the chart “Wild Thoughts” rebounded to peak at number two, being blocked off the top spot only by Despacito by Luis Fonsi, Daddy Yankee and Justin Bieber. It also earned Rihanna her record-extending 29th Radio Songs top 10, continuing her lead over Mariah Carey (23). “Wild Thoughts” additionally peaked at number one on the Hot R&B/Hip-Hop Songs chart, becoming Rihanna’s seventh number one, Khaled’s third and Tiller’s first.