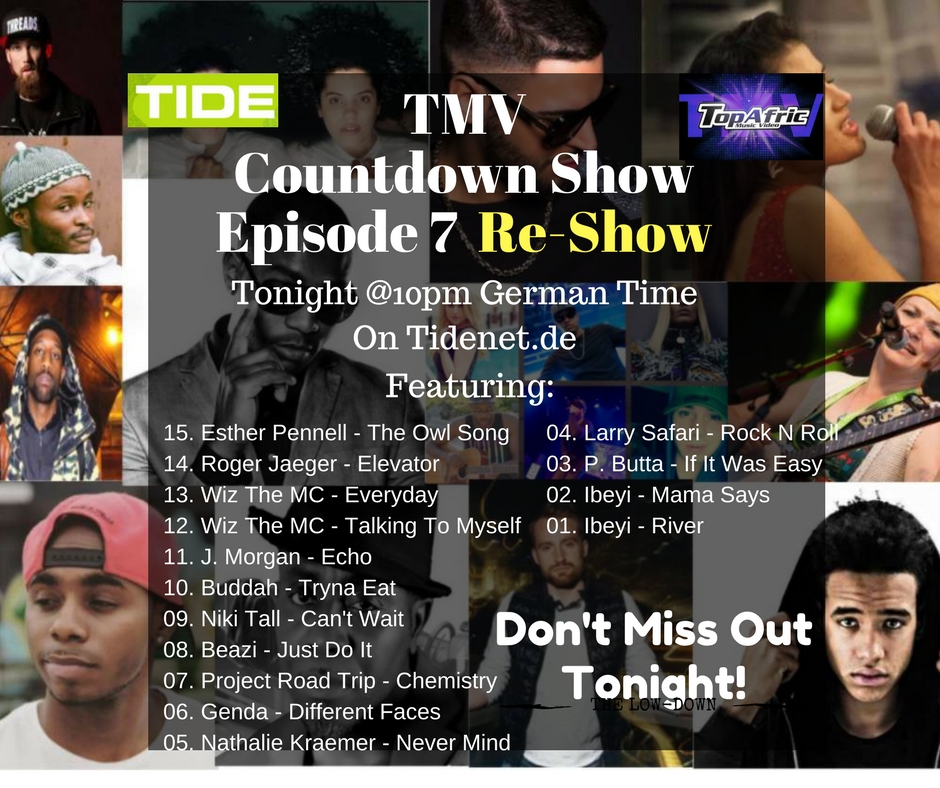 Last week Monday 3rd of June we present the famous TopAfric Music Video Countdown Show Episode 7 and it was surely fun all through. With a long list o

Last week Monday 3rd of June we present the famous TopAfric Music Video Countdown Show Episode 7 and it was surely fun all through. With a long list of beautiful artists across Europe with their different genres. It wasn’t a deliberate list based on chart anyway. Every artist that feature on the show where selected ordinarily and they are very well up to the task.

TopAfric Music Video has always in the past try to ensure that every Independent, unsigned, and Up Coming artist gets the chance to showcase their music on a wider platform where there is a high probability to get the connection needed to promote your music.

Our show intends to promote your music on a platform that has over 500k active viewer in Hamburg and Germany at large.

TMV Countdown Show Episode 7 Re-Show is to show our loyal artists we care much about them and they are our main concern when it comes to Music Promotion and Artist Branding. On the list, we have 15 number of artist across different parts from the world however mainly Europe.15 we have Canadian Folk Root Singer and Songwriter, Esther Pennell with one of her Debut song, The Owl Song.

14. Roger Jaeger – Elevator: Roger Jaeger is from Oklahoma, US. The song Elevator from his third album Start over

You can see the rest of the list on The official TMV Countdown Show Episode 7 page to view the other artists and their songs.

In a bid to reach out to more Independent, unsigned, and Up Coming artists across the world for massive promotion and branding, TopAfric Music Video is creating a platform which artist can get their song streamed online, downloaded, get followers, and build a fan base.

Blakting is a new platform created by TopAfric Music Video that’s currently going viral for massive music streaming and fan base creation. It’s a Social Platform where you can build up your fan base and know who is listening to your music and who is interested in buying them.

Another opportunity being offered by TopAfric Music Video is our Mailing Subscription which we have made the ticket to getting our basic music promotion and branding. It’s easy, Subscribe to our mailing list and you become part of TMV artist and we start our basic promotion for you straight up which attracts no fee.

As our next Countdown Show (Episode 8) will be showing soon on TIDE TV, we are giving every artist out there the opportunity to be part of the show. There is more to get than just the countdown show. To be part is simple. just subscribe to our mailing list Today and You have taken the very first step.