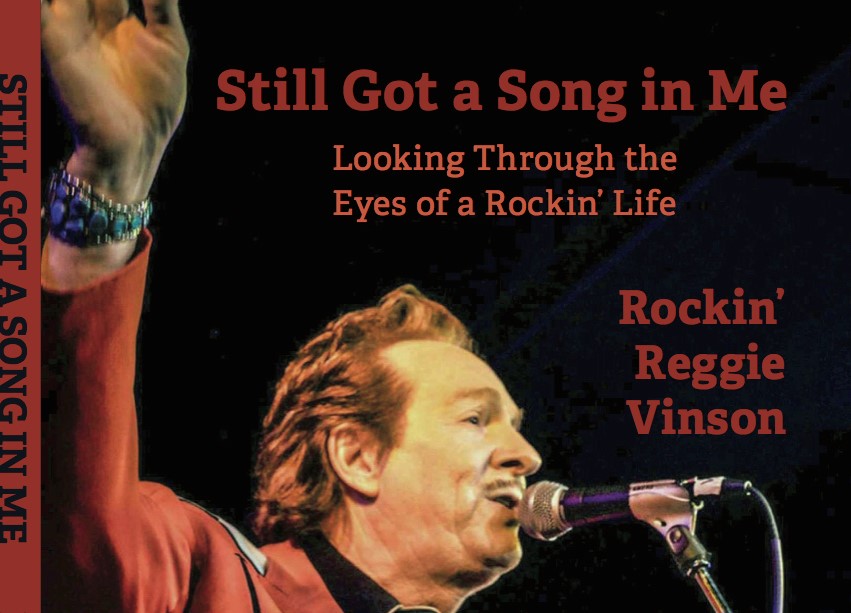 “Rocking Reggie Vinson” is the nephew to the legendary “Minnie Pearl” an American country comedian who appeared at the Grand Ole Opry for more than 50 years and on the television show Hee Haw from 1969 to 1991.  He learnt all he knows about music from her.  According to “Dancing About Architecture” “it’s safe to say that “Rockin’ Reggie Vinson moves in fairly exulted musical circles. Cousin to Pat Boone, session man for John Lennon, co-writer and guitarist with Alice Cooper and with a resume that reads like a who’s who of modern music, he has certainly rocked with the best of them”.

If you like Rock n Roll music mixed with Country, Soul, Pop, and R&B, then you gonna love “Rockin’ Reggie Vinson’s music and style. He recently released a book entitled “Still Got A Song In Me”  where he talks about his mum, living in Detroit, and how a little luck embedded with hardwork got him to where he is today.  But he still got a lot more in him and hence the tittle of the book. We got a rare chance to do an exclusive one on one with the Legend and here’s what he had to say.

Q: Can you please tell our readers your real name as well as your stage name?
Reggie Vinson aka Rockin Reggie

Q: Where are you from and Where are you based?
“My mother and father were living in Baxter, Tn but, my mother had to go to the hospital in Cookeville, Tn. for me to be born. So I lived in Baxter and it was a really small town, with a Train Station, an Old Clock, and a Cannonball in the Town Square. I had Aunts, Uncles and Cousins that lived in both towns.
I remember the times everyone got together to play music and sing. My Uncle Mac was always going dancing every Saturday night at the town Hall. He was still dancing the last time I saw him he was in his nineties and lived to be 97. I’m sure he is in heaven still dancing..

Then we would go to church on Sunday morning and Sunday night. Those were the good ole days that life was so simple and so much fun.

Q: At What age did you start making music?
My aunt was Minnie Pearl and she taught me about music since I was very small.

Q: what genre would you consider yourself?
Rock n roll and love songs.

Q: Tell us about your book

Purchase a copy of the book about Reggie’s incredible life story, and his amazing inspiring music CD that accompanies it by clicking this link.

In the decades between his childhood baptism in the Tennessee River and his born-again baptism in a swimming pool in Las Vegas, Rockin’ Reggie never stopped rockin’, from early sessions with the likes of Chuck Berry and John Lennon, to gold-record fame with Alice Cooper.

Singer, songwriter, guitarist, producer, arranger: Rockin’ Reggie has seen the highs and the lows of the music industry. The stories in this book are unforgettable snapshots of his rockin’ life: partying with Elton John, escaping the drunken wrath of Jerry Lee Lewis (and the amorous advances of Sammy Davis Jr.), mentoring KISS, finding salvation with Johnny Cash, and many others.

From rockabilly, rock ‘n’ roll, country, and now gospel, Rockin’ Reggie still hasn’t come to the end of his song.

Q: Who wrote it and what was the inspiration behind it
I wrote the book to inspire other young musicians and artists to go and express your joy and God will bring dreams to you that will come true more amazing than you even imagined.

Q: If you were given a chance, which Artist would you love to perform with?
I have been very blessed and privileged in my life to have played and work with many of my heroes and iconic legends, but I’m always up for another song!

Buy a copy of my book and cds here: