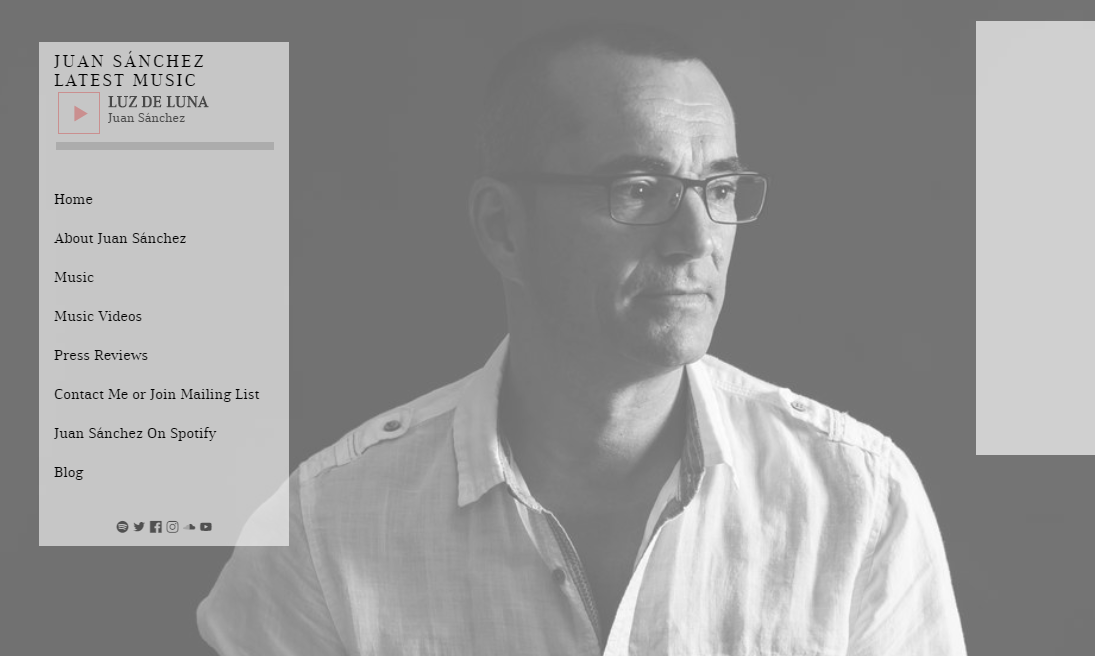 Juan Sanchez, a neo classic composer started piano lessons at 14 which corresponded to when his insurmountable passion for music kicked off. He joined different bands as a keyboardist during the 80’s and the end of the 90’s. This further helped build his passion and confidence in what he loves doing most at the time. Furthermore, he traveled to London in 1995 to consolidate on his new found passion and drive by enrolling as a student of music for 5years. He capped it with a feather of making what he described as instrumental ambient music and has not looked back since then by creating multimedia and sound libraries for producers.

His first single, Rebirth was birthed by mixing classical music with electronic sounds using the piano as the main instruments or succinctly put, without equivocation, is a mixture of classical/ ambient style and piano focused. It received a lot of rave positive reviews to critical acclaim from the listeners in general and music bloggers who wanted him to make more music.

This gives an insight into human feelings and emotions. This work is a product of soaking yourself into what you believe in, to get the required inspiration to deliver the great master piece. In his words, “sometimes, you have to soak yourself inside in order to rise from your own ashes and believe in yourself.

This is what I did during these last two years. I started to learn how to reprogram my brain and overcome my self- limiting beliefs that were hindering my growth, hence the title of the album “Rebirth”.

The opening track, “Rebirth”, is a great track. It is what I describe as an organic masterpiece. Its theme instantly connects with the totality of the listener. Though it has elements of pain, the pain is purposeful, a guiding star. Once the song is listened to, what comes to mind is the uncanny semblance of the sounds with Jordan De La Sierra’s 1977 classic, ‘Gymnosphere: Song of the Rose

The violin sound in the background balances its neoclassical outlook. The quality of the album is raw. Little wonder fans the world over love and appreciate his genre as Sanchez is not afraid to take risk when he needs to. This is epitomized in the way he carries his emotions into his music which ultimately affects the emotions of the listeners. It is in indeed a challenging experience too for him.

“Heading to dream land” is like an up tempo ballad that takes you to a better place of relaxation, peace and bliss. The structure is composed with a gentle piece of piano and strings.

“Artic solitude” is a brilliant piece that underscores loneliness which as a matter of fact, symbolizes the artic region of the world. The piano and strings blend in an orderly manner or in unison. This awakens your consciousness. Releasing an avalanche of epiphany. One that makes you cherish the music and the artist in your heart. This shows that Sanchez has really come of age in handling his emotions and challenging experience as he takes you through a beautiful journey of snow white vastness.

“Silent tears” among others is the curtain drawer to his debut work. This could be paradoxical. This beautiful song is unapologetic and a sad one that punches hard but overall, worthy of note and mention because it was beautifully crafted.

The rebirth project is one that gives hope to those who still allow the crystallization of negative thoughts overrule their sense of discretion. It makes you believe that you can actually achieve what you set your mind to do, if you only believe. This album is a product of a dream, which actually, came true.