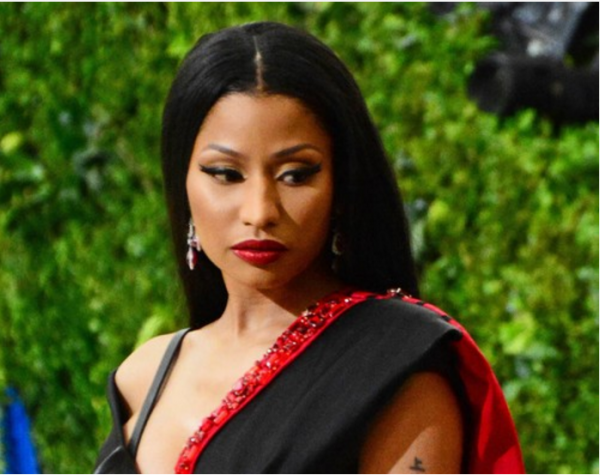 USHER SEX SCANDAL: GIRL SAYS “I HAVE A SEX TAPE WITH HIM” … THERE’S SURVEILLANCE VIDEO, TOO!
[See Videos] Bobby V Got Caught Again With An Alleged Trans Woman!
Chris Brown Gets Residency Back At Drais Nightclub

Nicki Minaj has played down rumours she is dating fellow rapper Nas after sharing a photo of the pair enjoying dinner at his new Los Angeles restaurant.

The Anaconda hitmaker, real name Onika Maraj, took to Instagram on Tuesday night (09May17) to post a snap of the two sitting side by side at Nas’ fried chicken eatery, Sweet Chick.

“Only KINGS recognise QUEENS,” she captioned the image, in which they both pose with their eyes closed, while Nas appears to nuzzle Nicki’s hair as he wraps his arm around her shoulders. They also rocked the same diamond-studded chain.

“@sweetchicklife has the best food,” she added. “congrats @nas”.

The One Mic MC shared the same photo on his Twitter account, and wrote, “Straight Outta Queens!”, giving a shout out to their shared home city of Queens, New York.

Fans immediately began speculating about a possible romance after the cosy picture appeared online, and devotees even coined a new nickname for the rumoured couple, with “#NasNika” becoming a trending topic on Twitter.

However, Nicki, who split from rapper Meek Mill in December (16), seems to be brushing off the new gossip.

One fan grabbed the star’s attention after sending a screenshot of Wednesday’s (10May17) hot topics to Nicki: “Trending # (number) 4 now on the charts @NICKIMINAJ yessss (sic),” wrote the follower, prompting the 34-year-old to repost the image and respond, “y’all so d**n silly (sic)”.

Nas has yet to comment on the dating speculation. He became an investor in chef John Seymour’s Sweet Chick chain in 2015 and helped owners secure funding to expand outside of their two New York City locations. The Los Angeles branch launched last month (Apr17).