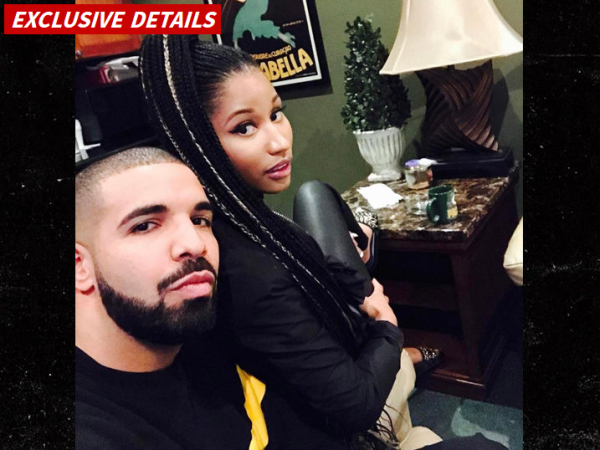 Nicki Minaj and Drake have ended the cold war that lasted more than 2 years. Nicki posted a photo of herself and Drake Wednesday morning ... with n

Nicki Minaj and Drake have ended the cold war that lasted more than 2 years.

Nicki posted a photo of herself and Drake Wednesday morning … with no caption, but we know what went down before they squashed the beef.

Our Young Money sources tell us Drake saw an NFL Network segment on January 8 that featured Lil Wayne and Nicki. Drake immediately called label honcho Mack Maine and said … “Why didn’t you tell me the family is back?”

Mack quickly set up a meeting for the full Young Money roster that turned into a peace summit. We’re told Drake hopped on a jet to Miami on January 12 and sat down with Nicki and Wayne. The photo she posted was taken during that meeting.

Remember … Drake and Nicki haven’t spoken since they recorded “Truffle Butter” in 2014. She purposely stayed on the sidelines during his beef with then bf Meek Mill. Nicki announced their split on Jan. 5 — one week later she was chopping it up with Drake, and we’re told everything’s cool between the labelmates now.

As Drake said, “I don’t wanna hear about this ever again. Not even when she tell him they’re better as friends.”

Speaking to Zane Lowe on his Beats 1 radio show last April, Drake revealed: ‘I don’t really talk to Nicki. Another person I have a lot of love for.’

However, while they were not as close as they once were, there appeared to be no animosity between them.

Drizzy continued: ‘She dealt with me how I would expect her to – with class. I always have respect and love for her. Unfortunately, we haven’t spoken.’

The feud between Drake and Meek began in July 2015, after the latter called out his former pal for not tweeting in support of his latest release.

Meek accused Drake of not writing his own material and claimed that his knowledge of this was the reason the Grammy winner didn’t post about the album.

Nicki – whose real name is Onika Tanya Maraj – dumped Meek after an ‘explosive fight’ during her birthday getaway in Turks & Caicos in December.

‘She went nuts on him because he was hanging out with friends and not paying attention to her,’ a source told TMZ.

After the birthday girl lashed out on her beau for the lack of attention, Meek reportedly left the island without the Super Bass singer and that’s when she ended the relationship.

Meanwhile, the beauty has been busy filming her latest Run Up music video alongside Major Lazer and PartyNextDoor.