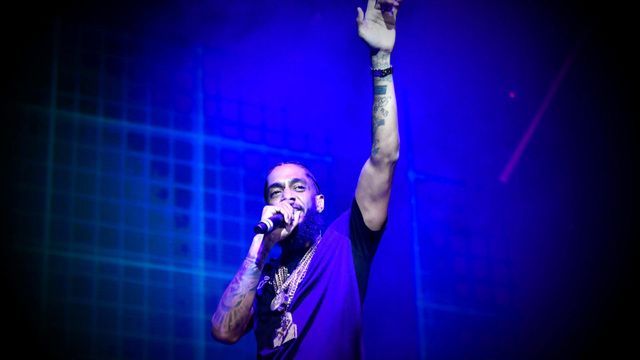 After a night of drinks, kush and tears, Lux Wave decided to write a tribute to the Great Nipsey Hussle. Nipsey Hussle died on Sunday, March 31st, 201

“Lose Control” By “Marquette King” is Worth Listening
“Silhouette” By “Burt Dogg” is Very Unpredictable yet So good
Review on “Royalty Fees” by King EmErY ft. N’Less

After a night of drinks, kush and tears, Lux Wave decided to write a tribute to the Great Nipsey Hussle. Nipsey Hussle died on Sunday, March 31st, 2019 after a shooting in Los Angeles near a clothing store he owned, according to a high-ranking law enforcement official with the Los Angeles Police Department. We asked Lux Wave a few questions as to why he made this tribute and here is what he had to say

Q: Can you please tell our readers your real name as well as your stage name?
A: Lux Wave

Q: Where are you from and Where were you based?
A: Born in Akron, Ohio based in L.A

Q: Are you a Nipsey fan? or just a brother who cares?
A: Have been a fan of Nip’s since the jump, from all the old tapes, bullets to marathons, he got better every year.

Q: What made you decide to write a tribute to Nipsey_ ?
A: I had to pay my respects, Nip was a guiding force in the game, it was like a therapy session.

Q: Who wrote the lyrics to the track _?
A: I am my own ghost writer. I wrote it

Q: Who made the beatz?
A: Not sure exactly who made the beat, i just know its his “picture me rollin” track, it just had the best vibe for the subject. After a night of drinks, kush, and tears, i wrote the verse in like 10 mins. I wish i didnt even need to tho, i’d rather him be here to do his thing.

Q:Who made the video?
A: I threw the video together, quick little gif loop, it just had that blue angel type feel.

Q: Can u tell us why you think Nipsey got killed? and who do you think is behind it?
A: Nip was a motivator, a mogul, his plans reached farther than your average rap dreams, he had his hands in a lot of different ventures, that scares close minded people, so progress was stopped, and now its all theater tactics with smoke and mirrors, shits sad, its just all bad, i feel for his close fam the most.

Q: Whats you final message of consolation to all true Nipsey fans?
A: Nip being a visionary, basically left a blueprint of how to hussle & motivate, and as fans, we should use nip’s death to bring new life to his ideas and concepts, and just be better people over all, in the streets and in the business world, strive for greatness, respect is earned, love is stronger than fear. The Marathon Continues!