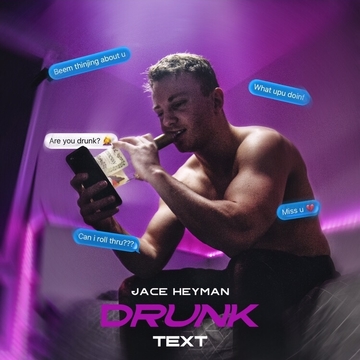 The song is about Jace breaking up with a love interest, which catapults him into a club to clear his head and get some distraction from his failed relationship, which was to no avail.

Joshua James Heyman also known as Jace Heyman is a pop and RnB singer from Hertfordshire, England. He began music at an early age after listening to those artists who inspired him. He was also very popular during his secondary school days for his dance steps. Those skills were well tailored into a career choice for him.

He wrote his first single, Drunk Text, alongside Dean Risko, which is also a testament to his song writing skills. Drunk Text is a mixture of pop and RnB genre laced at intervals with some fine Caribbean tunes. The song is about Jace breaking up with a love interest, which catapults him into a club to clear his head and get some distraction from his failed relationship, which was to no avail. It prompts him to send the “drunk text”, as depicted by the title of the song. He later realizes it was a bad way of searching for solace or comfort. Everyone can relate to this. It is about missing someone who was once dear to your heart. It is about searching for a way to deal with failed relationships and break up.

It is the leading track from his upcoming EP, “Lovin’ Under the Influence (LUI)”. It has a mid-tempo danceable groove. The synths, the audacious vocal delivery, the serenading percussion sounds and the dope beats sequence all combine to add scheming flavor to the song. The music video plots begins with Jace entering a club and ordering his usual in response to the lady bar tender who threw the question, “usual?” at him. He is later seen alone at the bar end of the club, sipping from his cup as he begins to sing the opening lines of the song while reminiscing on the good times he had with his ex-love interest with alternate scenes of clubbing activities popping up as he remains in the bar singing and reminiscing. He could be seen later, being joined by other guys and ladies on black attire who apparently doesn’t catch his fancy, even as the choreographers evolve while the song continues till fade.