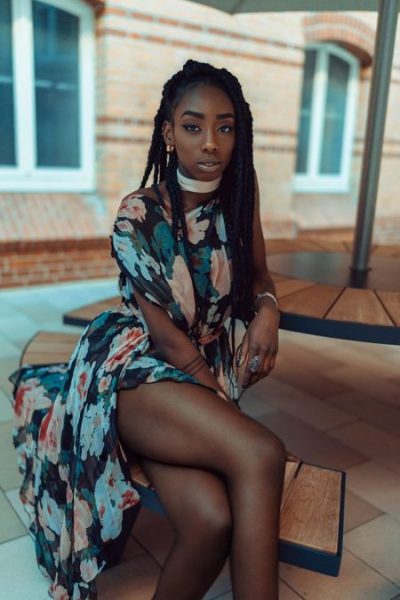 Ace Tee's silky voice takes us straight back to the 1990s. Released at the very end of last year, "Bist Du Down?" (German for "Are You Down?") has mad

12. The Big Talk On NG-Black’s “Next Level”.
SoulSonic’s New Single, Rise Is Revolutionary
7 Indie Artists That You Need to Hear!

Ace Tee’s silky voice takes us straight back to the 1990s. Released at the very end of last year, “Bist Du Down?” (German for “Are You Down?”) has made ears perk up internationally in recent weeks.

The track boasts a style reminiscent of artists who left us too early — Lisa “Left Eye” Lopes from TLC and Aaliyah — and a lively verse from hip-hop artist Kwam.e. “There are a lot of great artists in Germany right now, but the vibe is a bit dark and we are known mainly for Trap music,” Ace Tee told Vogue. “I want to put R&B on the map here and create my own sound.”

“I was inspired by TLC’s ‘What About Your Friends’ video,” Wilda says. “I wanted to create a new kind of ’90s mood, to inspire people to be happy and to get down with honesty and love.” She adds, “There are a lot of great artists in Germany right now, but the vibe is a bit dark and we are known mainly for Trap music.

n sound.” Everyone in the music video, Wilda included, brought whatever they wanted to wear to set, with the singer rummaging through the pile of thrift-store jackets and baggy jeans to piece all of the accidentally brilliant looks together.

There’s the oversize yellow parka, purple trousers, and gold door-knocker earrings (which Wilda says she stole from her mom who is Ghanaian—“Those earrings are everywhere there.”). In one scene, she’s dressed in a knee-length denim skirt and white mock-neck crop top and in another, a gray Fila sweatshirt. “I’ve always dressed old-school,” the singer says of her everyday street style.

“I don’t wear skinny things, which can seem weird to the typically tailored, luxury-obsessed people in this country, but I feel more comfortable in tracksuits and boxy clothes.”

So much trending going on internet and social media for AceTee on this one.

next #generation of #RNB, #FutureRNB, #Hamburg to the #world of #music, “Bist Du Down?” #AceTee feat. #Kwame #song https://t.co/HMR5iPEdIz

We spoke to #AceTee about creating her epic earworm & our song of the month, “Bist du down?” ? https://t.co/TFlo8hqPds #bistdudown pic.twitter.com/A2RQ5d9QSn

Hamburg locals may not be on board with the ’90s hip-hop trend just yet, but Wilda foresees a change in the near future:

“A lot of people love to dress like skaters and wear Stüssy, Champion, and Supreme.But I can see more and more of my friends dressing in baggier looks, wearing bat-wing jackets and braiding their hair. They’re getting more creative with street gear.”

She acquired most of her video wardrobe from the places where she usually shops for clothes—on eBay and at various thrift stores around the city. Sometimes, she makes occasional trips to Niketown or Acne Studios. She likes to wear mostly monochromatic looks and tries not to “go overboard” with any one theme. To her, great style is about being, “slick and unique.”

The opening scenes of the music video for “Bist du down?” the breakout single from German R&B star Ace Tee, looks like something out of an ’90s hip-hop party: Guys and girls dressed in cool streetwear looks dance against a graffiti-covered landscape. “We’re not really allowed to hang around there,” says Ace Tee, whose real name is Tarin Wilda, of the location—under train tracks in Sternschanze, a trendy Hamburg neighborhood. It’s a raw, unbridled energy and style that harkens back to a different era, one that’s been getting major buzz on YouTube in the weeks since the video dropped.

Wilda’s mood board for her video included TLC’s Tionne “T-Boz” Watkins in an oversize mustard-color shirt and loose green cargo pants; rapper Da Brat in a football jersey with a bandana tied around her head; British singer FKA twigs wearing a fishnet top; and, rather surprisingly, a photo of Cindy Crawford in cutoff denim shorts, a white button-down tied at the waist, and silver hoop earrings.

Inclusion and diversity, though, is at the heart of Wilda’s music and her approach to dressing.

“I wanted my video to include people of all ethnicities and backgrounds to say look, we’re all one, we can wear the same hairstyles and the same clothes. Ideas about beauty, fashion, and music (especially hip-hop) don’t have to be divided.”

“The ’90s music from TLC, Missy, Aaliyah wasn’t about being down and out in the hood, it was about trying to get people into a certain groove, to enhance their mood, and that’s what I try to do with the way that I dress and the way that I sing.”

Wilda may have snuck into that forbidden place beneath the train tracks the day she filmed “Bist du down?” or “Are You Down?” in English, but if she is guilty of anything, it is daring to create a positive new sound and sartorial vision for her European hometown. With her music and her dress, the mesmerizing Ace Tee is officially one to watch this year. So, how do you say, “Crazy, Sexy, Cool” in German?

With her music and her dress, the mesmerizing Ace Tee is officially one to watch this year. So, how do you say, “Crazy, Sexy, Cool” in German?